Thank you to everyone who came out to celebrations of Indigenous Peoples Day in 2018! 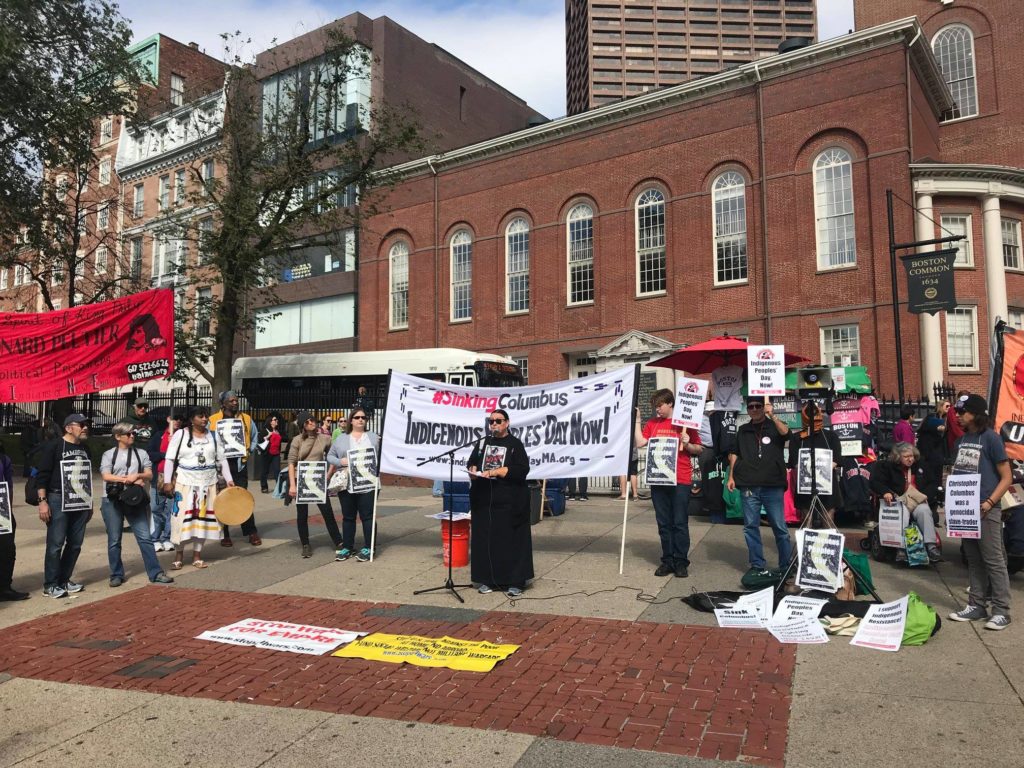 In Boston, over 150 people came together to march for Indigenous Peoples Day in Boston. The march was covered in Workers World and WEBN News.

You can see more photos from the gathering and march on Facebook. 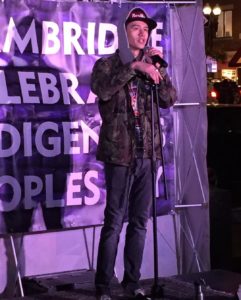 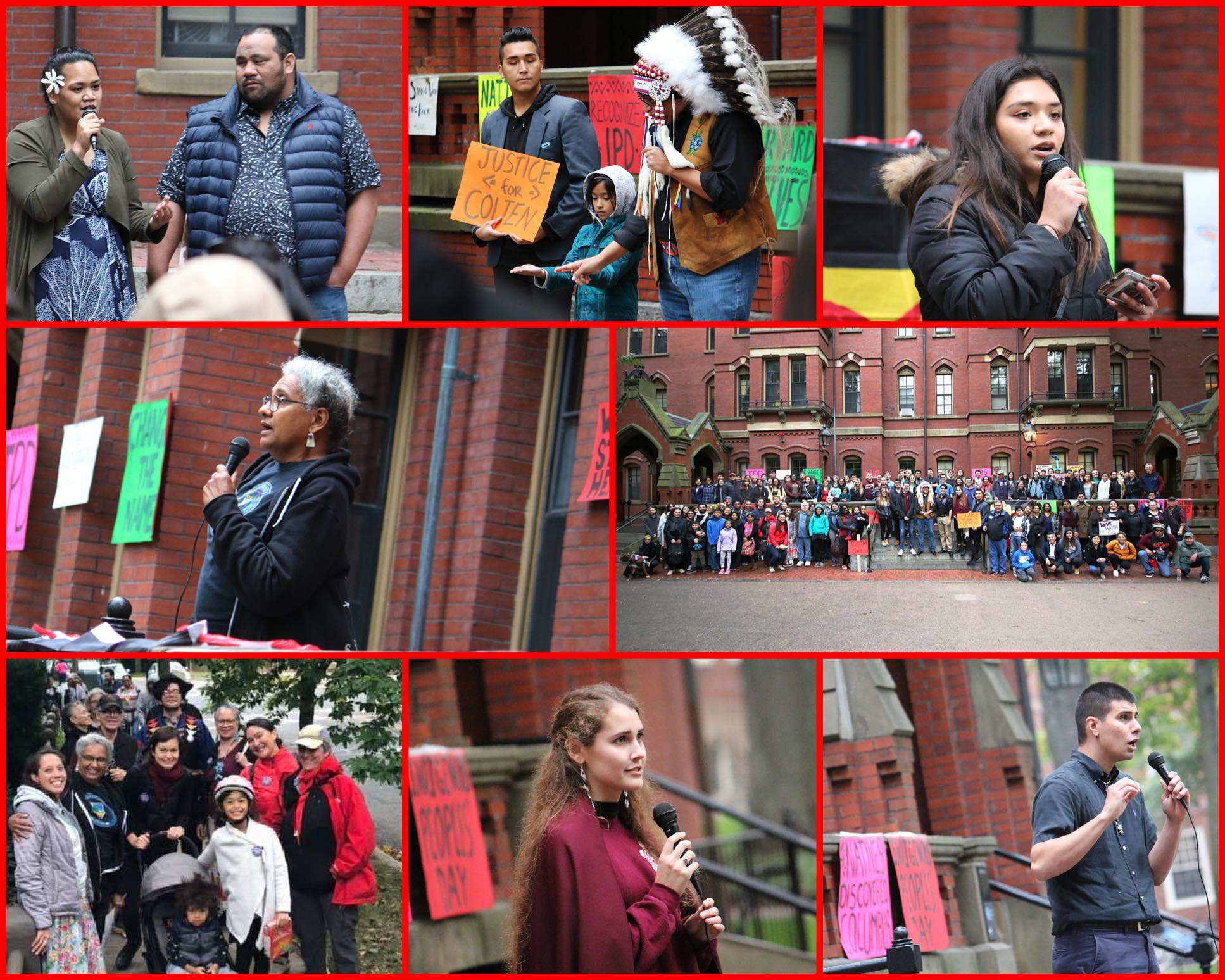 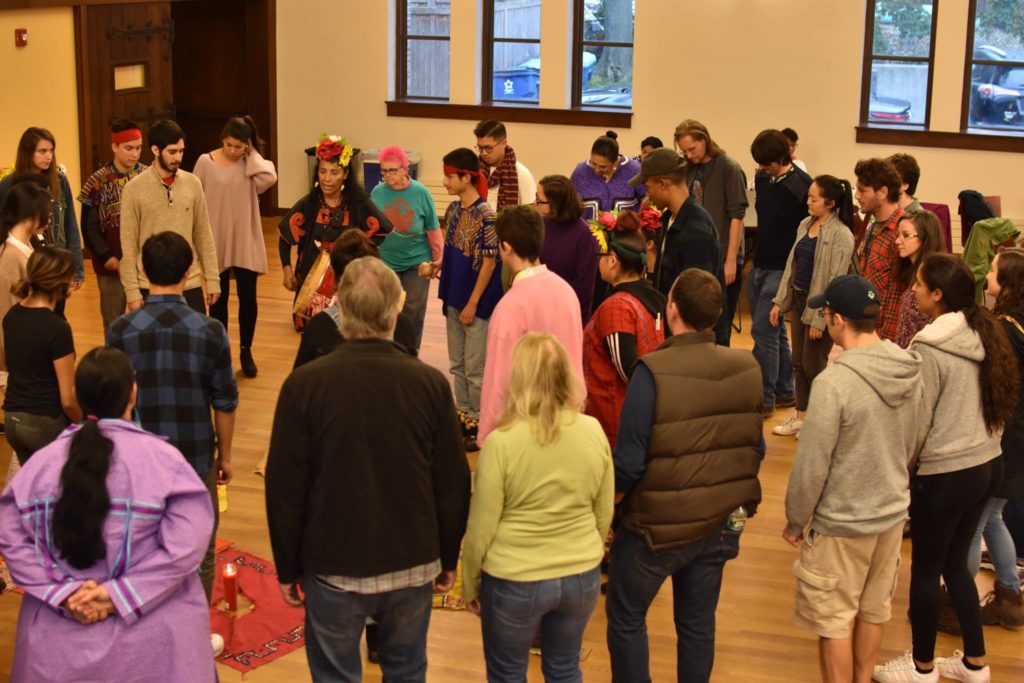 Recap via Indigenous Peoples Day at Tufts: “Tufts’ third annual Indigenous Peoples Day Celebration! Massachusetts has been a gathering place for many Indigenous Nations, including the Massachusett, Wampanoag, Nipmuc, Narragansett, Abenaki, and other nations. Recently, the Mashpee Wampanoag tribe’s land was taken out of trust by the Trump administration, marking the importance of naming the tribes whose land Tufts and other universities occupy, as well as to act in solidarity to re-secure treaty rights. The history of Columbus is one of genocide for Native peoples. An estimated one million Arawak peoples on the island of hispaniola were murdered within the first 20 years of contact. In the years since, Indigenous people have been the target of genocidal policies, many of which have been aided and taken root in universities and graduates from them. Since 2016, we have gathered on the first Monday of October to acknowledge the first and present Indigenous occupants of this land; to recall Tufts’ history and complicity in the occupation of this land, and what this has meant for Indigenous peoples here; to celebrate and remember Indigenous resistance and existence; and to plan for the future, and what else needs to be done towards decolonization at Tufts and beyond the universities walls. We also gather to break down the Ivory tower walls of the colonial institution to gather and celebrate with our communities around and among us. This celebration is possible because of years of Native and allied student and faculty movements. Genesis Garcia and Andrew Nuñez began the push in the 2014/2015 school year, but less than half of the faculty voted in favor of the change when presented with the vote. In the year 2015/2016, Anna Del Castillo, Benya Kraus, and myself led the renewed push for the vote to happen the following year, which after a coalition of more than 30 student groups, combined with supportive faculty, and 2 resolutions from the TCU Senate, faculty finally voted nearly unanimously in favor of recognizing Indigenous Peoples Day in place of “Columbus Day.” Beyond just recognition of Indigenous peoples and the accurate history and present reality of this land, this push for Indigenous Peoples Day accompanied many other pushes for Indigenous people at Tufts. Former professor Jami Powell led a push for Tufts to accurately recognize the names of the different peoples who’s historical land Tufts occupies; students and faculty have pushed for a Native American and Indigenous Studies minor; and students have made calls for Tufts to divest from the Dakota Access Pipeline. We remember all of these important fights at Tufts, and continue to push the university to do more to recognize its role in colonialism and its potential for decolonization.”

More photos from the event courtesy of Kyle Lui.